What to do about Project Assassins 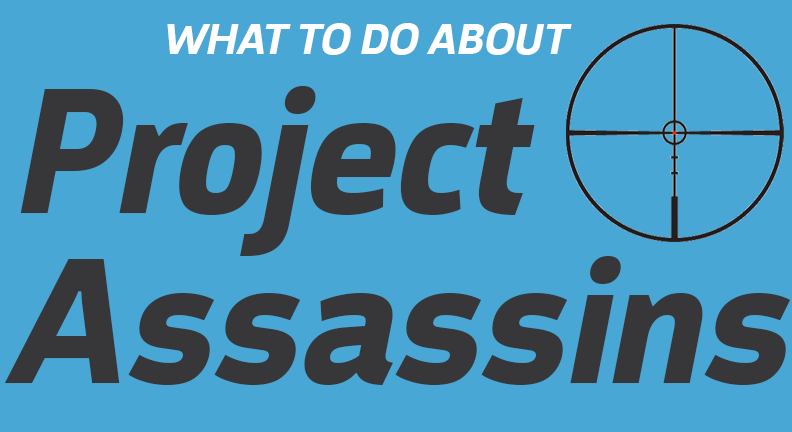 This week, I was asked a great question during a training session, “What do you do if you start a project and the customer already has a negative opinion of you?”

THEY ARE NOT A FIGMENT OF YOUR IMAGINATION

People are always teeing up the current vendor to fail so that they can bring in the company they worked with at their last job, the company that their friend works for, or simply the company that keeps taking them to football games. It’s very possible that some people might see opportunity in accelerating your demise. Not all people act on it, but you’d be surprised how many do.

One of our customer-facing project strategies is to identify two distinct groups within the customer’s environment. The Direct Line of Pressure (DLOP), which are those people assigned to the project by the person(s) who signed the contract that funded the project. These people are delegated to the make the project a success and their careers are linked to the project’s outcomes. This puts everyone outside of this delegation in the second group, which we call the Indirect Line of Pressure (ILOP).

FLUSH THE ASSASSIN INTO THE OPEN

You can deal with an assassin in the ILOP by bringing your concerns back into the DLOP. This shines a spotlight on the assassin’s behavior and gives the customer’s project team (who needs the project to succeed) a chance to negate the assassin’s impact. While not foolproof, this approach is incredibly effective and usually yields excellent results.

However, an assassin within the customer’s project team can make a project difficult and unenjoyable. It is important to understand if you can quickly turn this person into an ally. To do this, you should assign them responsibilities early in the project and evaluate if they are willing to be held accountable for helping you deliver success. Some people can be negative in their tone, but still be professional in their actions. I’d say this accounts for most of the negative influencers I’ve worked with. Although they appear to be assassins, they are just annoyed.

If, however, you believe that your assassin will not turn, then you should sit down with that person and see if you can straighten things out. You may discover why that person is being negative. It can be any manner of things that turns someone into an assassin. The best outcome is for this conversation to clear the air, but if it does not, then the next action becomes clear and urgently important.

You should now notify the customer’s project stakeholder of the potential assassin. Customer’s executive sponsors want their projects to be successful and they are typically willing to listen to what you have to say. How they respond will depend on many things, but I’m always amazed at how swiftly most customer executive stakeholders will take action if proactively asked by the service provider. If your recommendation was to remove this person from the project and customer’s stakeholder did not, it may be wise for you to document that your request was denied.

A SIDE NOTE: TALK TO SALES!

Something the professional services team often forgets is that sales can be a strong ally when it comes to navigating the customer’s political minefield. They worked with the customer’s executive stakeholders and potentially the assassin for a long time. Sales people are great people-people.  They navigate these situations all the time. Use that to your advantage.

UH-OH! THE PROJECT’S SPONSOR IS THE ASSASSIN!

While you were worried about getting stabbed in the back, you took two to the chest. It is very rare that the initial customer project stakeholder turns into the assassin at kickoff however, this can happen in one of two ways.

This is the potentially the most difficult place to be in a project environment. If one of the key customer stakeholders doesn’t want you there, then you have to act quickly and decisively. Other than continuing to work with sales on political resolutions, my only recommendation is to step up your project leadership. Don’t let the customer dictate anything with respect to the project’s direction. The minute you give the customer the ability to lead the project astray, you give their executive stakeholder everything needed to make your project a living hell.

The customer’s stakeholder can use your failure to lead as the reason why you owe them free work. If you provide it, the stakeholder looks great because the customer is now getting more value than what they are paying for. On the other hand, if you don’t comply, they are able to terminate your contract and provide you with a bad market reference. It is possible that your customer’s executive stakeholder assassin is going to ride this wave as far as it can go. This is the same wave many savvy customer stakeholders ride when a service provider repeatedly disappoints them during a normal project. In this situation, the assassin is just accelerating the timeline unfairly.

If you can step up your project leadership and maintain that position throughout the project, one of two outcomes will occur. You’ll either finish the project despite the assassins attempts, but you’ll retain your margin, or (and most likely), you’ll eventually get removed. Maintaining the leadership position gives you the best chance of not having to give away hours so that when you are removed, you are able to fail gracefully and end the failed project with a profit.

SUMMARY: GET DEBRIEFED AND ACT QUICKLY

Get a proper hand over from Sales. Ask them if there were any assassins they had to deal with during the sales cycle. Ask if there is anyone who might have business relationships that might prosper should our project fail. If there is, then get to work immediately and start holding that person accountable to test his or her allegiance.

If you find out that your customer’s project stakeholder is the potential assassin, then immediately involve sales and then aggressively lead the project. Try and keep your nose as clean as possible even if that means walking into gnarly conversations and escalations. In this bad situation, the writing may be on the wall so the more you can control, the less you let others dictate about your final demise. Hopefully you can do enough to avoid being removed and finish with a successful, profitable but also painful experience.